We told Kyle he could sprint the last 50 yards of his mom's half-marathon with her. In retrospect, I should have communicated a little better with Christina on that detail. Chaos ensued and the little dude almost took out a few runners.

We waited a little ways before the finish and I told Kyle he would have to run extra fast to keep up with her. Having just run 14 miles, she was a little out of it when she came by, and I think she forgot that he wanted to run the last bit with her, so she said hi and kept running towards the finish line. But Kyle had not forgotten. He took off after her... FAST, and Christina had no idea he was behind her. I was left standing there holding Joelle and a bunch of other bags, food and jackets, watching runners dodge him until he slipped out of my vision. Found him standing on the finish line about to get railroaded by some Kenyans. Haha! 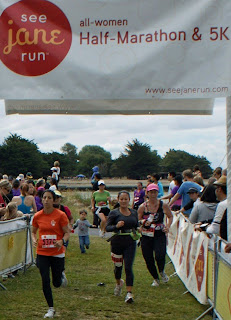 Photo Courtesy of Rahul Maharaj
Posted by Ian at 4:22 PM